Teaser For My Next Writing Project

I'm a couple of weeks away from finishing the first draft of Killer Instincts, and I've already got my next project lined up - a series of short historical adventure novels. Here's a working prototype of the cover for #1: 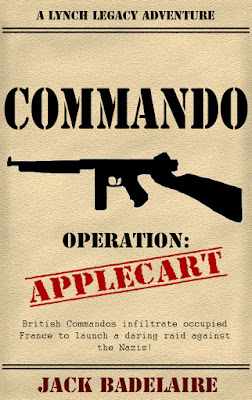 Three guesses as to what I might be writing about...
Posted by Jack Badelaire at 10:15 AM 5 comments

"There Is No More Deadly Weapon System..."

"...than a Russian with two AA-12. Keep in mind I am a professional Russian. Don't try this in home."

Automatic shotguns are great. Shotguns in general are pretty cool, and semi-automatic shotguns (SPAS-12, Remington 1100, Browning Auto, Benelli) are even more badass, but a shotgun that fires full-auto? That's like putting chocolate on awesome.

Back in the day when I was a wee lad and cutting my teeth on Able Team and Phoenix Force books, I loved how Carl "Ironman" Lyons had to have a weapon more badass than all his other combat buddies. While Pol and Gadgets were happy with their Beretta 93 Rs and their M-16s, Ironman had to have some customized Frankenstein M1911A1 .45 automatic with three-shot bursts and extended mags and suppressor, and his combat weapon of choice was the somewhat obscure Atchisson Assault Shotgun, a weapon designed in 1972. This is the original AA-12: 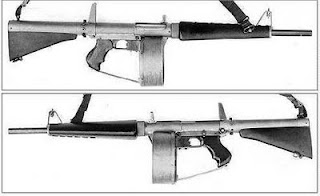 But the weapon has been redesigned into what you see in the YouTube video. This is one sick shotgun, and I can see now why Ironman loved running around with it, turning bad guys into sausage meat.

Apparently the spirit of Carl Lyons was ported into Actor Terry Crews when his character started kicking ass in The Expendables, blasting away bad guys by the bucketful (and you'll need a bucket to cart them away after he's done, believe me...). Here's some shotgun action from the movie:

One of these days I need to get my hands on an AA-12 and wreck crap with it. And hey, shotgun ammo is cheaper when you buy in bulk...right?
Posted by Jack Badelaire at 10:07 AM 6 comments 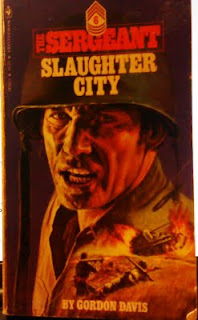 Although post-modern pulp fiction is dominated by the serial vigilante novel, closely followed by the serial spy thriller / anti-terrorist kill team / gaggle of badass mercs adventures, there have been a couple of solid World War II post-modern pulp titles. The most notable of these is The Rat Bastards, which have at least 16 titles and possibly more (if anyone can give me a more accurate count I'd much appreciate it).

I've been recently directed towards another World War II title - The Sergeant, by Gordon Davis (the pen name of Len Levinson). This is a series of nine titles following the exploits of Master Sergeant CJ Mahoney, a real rat bastard himself, a thug and miscreant who enjoys screwing and fighting in equal measures, and apparently has to get some of each in each of the novels. I will direct readers to pulp blogger Henry Brown's excellent reviews of Book 1 and Book 4 - this is a review of Book 6, the crossing of the Moselle River and the assault on the city of Metz by Patton's 3rd army.

First off, I will mention that I enjoyed this book a lot more than I thought I would. It's not terribly written; although it isn't prosaic it is very readable, no better or worse than a lot of PMP fare. Levinson must have watched Patton about twenty times, because his depiction of Patton in this book is so spot-on with how he is portrayed in that film, especially during his morale speech before the crossing of the Moselle, that I could hear George C. Scott's voice practically reading the dialog to me.

Beyond the serviceable writing, this book reminded me a great deal of Bernard Cornwell's utterly awesome Sharpe series of Napoleonic War novels. I am a huge fan of this historical military action-adventure series, and so I was pleased to discover that in reading Slaughter City, the feeling was quite similar; a tough, no-bullshit lead character and a handful of repeat offenders who always get stuck with the dangerous important jobs because they've got the rare misfortune of being really good at what they do. Cornwell's sly mix of history and fiction allowed him to backdrop a lot of great fictional adventure with the history of the Peninsular Campaign, and I can see a similar feel in this book. Patton, Bradley, Hitler, Himmler and such are of course real characters fighting a real war, but interacting with Levinson's fictional creations to create a fictitious story loosely set within a number of facts.

And a bloody fiction it is. There is some real brutal violence in this book, which is fine by me, since, well - it's friggin' World War II. Bazookas, hand grenades, machine guns, high-powered rifles, tanks, artillery - it all makes for messy fighting. The most brutal examples of this combat take place during the Moselle landing, the house-to-house combat during the battle for Metz, and a desperate German gamble to use a rail line to punch deep into the Allied lines. Foremost in the insanity is the use of the bayonet in close combat.

Now, I won't argue that the bayonet was never used in WW2 - I'm sure it was. And I'm sure there were a few "bayonet duels" during that war, here and there. But at one point in the book it's as if every single soldier on the battlefield forgets he's carrying a repeating-fire (if not semi-automatic or selective fire) weapon, and resorts almost entirely to bayonet duels. At one point, a character even lays about himself with an engineer's hatchet, splitting German skulls and severing limbs by the sackful. Although Cornwell is guilty of an over-abundance of bayonet fighting in his Sharpe novels, at least the soldiers have a plausible excuse; the men of the 95th Rifles are carrying single-shot muzzleloaders, not M1 Garands.

Email ThisBlogThis!Share to TwitterShare to FacebookShare to Pinterest
Links to this post
Labels: book review, the sergeant, world war two

I've been pretty quiet the last few weeks. Trying to wrap up my manuscript while working on reading at least five different books for future reviews and begin another writing project...on top of work and graduate classes. Hectic times.

Michael Mann is one of my favorite modern movie directors, and one of my favorite Mann movies is 2004's Collateral, with Tom Cruise and Jamie Foxx. The story of Vincent the assassin and the way he is characterized was one of the seeds planted in my imagination that eventually grew into Killer Instincts; Richard, Jamie, and William all owe some of themselves to this film.

One of the coolest scenes in Collateral is the Club Fever Hit: Cruise goes into a crowded nightclub and assassinates his target with extreme prejudice...as well as a few bodyguards and cops along the way. This scene has a mix of combat and cool that really appeals to me.

During part of the DVD commentary, we learn that Michael Mann hired an ex-SAS commando to train Cruise for three months in the ways of combat tactics and marksmanship. A big part of that training was shooting drills...with live ammunition. I tip my hat big time to Mann for having the balls to insist on live-fire drills to instill in Cruise the methodology of firearm management you learn when handling a "real" weapon, not a blank-adapted pistol. Here's a chunk of that commentary:

One of the most lauded moments in the movie is the "Briefcase Shooting" - Tom Cruise out-shoots two guys in 1.3 seconds, one of whom has a gun in his face. Although yes, it is "fake", the methods and moves he uses are very well done - an impressive bit of shooting skill.

If you haven't seen this movie already, it's definitely worth checking out.
Posted by Jack Badelaire at 10:34 AM 2 comments

The Dead Man isn't your typical serial vigilante. He's not a former Marine, an ex-Special Forces sniper, CIA freelance operative, martial arts expert, grieving liberal accountant, disgruntled cop, or any of the usual former professions for the average protagonist in the men's vigilante adventure sub-genre. Matthew Cahill was just a lumberman working in a sawmill, until one fateful day something horrible and unexpected happened that forever changed him. Now Matt wanders alone, searching for the mystery of what happened to him, and the origin and motives behind the mysterious Mr. Dark.

Lee Goldberg was kind enough to send me a review copy of DEAD MAN #2, Ring of Knives just before I went on vacation for the weekend, and as I was planning on bringing my iPad with me anyhow, I read RoK on the bus down to NYC. It was definitely a page-turner; I read the whole installment in little more than an hour. The action and suspense came fast and furious, and when I reached the end, I was immediately disappointed that I'd have to wait (im)patiently for the next tale of the Dean Man to come along.

Now that the origin story in issue #1, Face of Evil is out of the way, Ring of Knives gives us a glimpse into what this series could really look like, and the prospects are fantastic. This is a creepy, violent, action-packed tale of suspense and supernatural horror. This isn't just weird, it's a glimpse into a dark, bizarre, and twisted world, one that the average person is completely unaware of...until the screaming begins. And then it's too late. If you loved the glimpses into the world of the strange and unusual given by such shows as The Twilight Zone, Outer Limits, X-Files, and Fringe, you're going to love DEAD MAN.

After having read the first two installments of DEAD MAN, I feel I can say with some confidence that this is the future of serial adventure fiction; short, snappy page-flippers that provide a solid hour (or two, or three) of exciting literary entertainment delivered right to you instantly through the Internet. As long as prices continue to stay low and quality continues to remain high, I see the DEAD MAN series having a long and successful publication run, the pioneer for what is sure to be many more serials to come. This is going to become, in more ways than one, a return to the era of the classic serial pulps, and I for one couldn't be happier.

When it happens, I'll be the first in line every time.
Posted by Jack Badelaire at 5:39 PM 6 comments