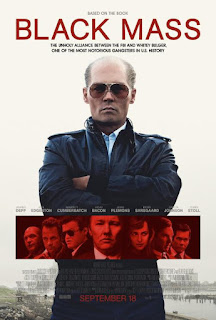 I was able to attend an advance screening of the film BLACK MASS this past Thursday, followed by a question and answer period with Dick Lehr and Gerard O'Neill, the two reporters who wrote the book the movie is based on, and who broke the original story behind the FBI's illegal ties with organized crime in Boston.

Long story short, BLACK MASS follows the twenty-year collusion between James "Whitey" Bulger and FBI agent John Connolly, Bulger and Connolly knew each other growing up in South Boston, and when they find each other on opposite sides of the law, Connolly enlists Bulger's assistance in getting information that'd be used in taking down the Mafia in Boston, and in return Connolly would work to prevent legal obstruction or investigation into Bulger's criminal enterprises.

As can be expected, nothing good comes from any of this.

As a film, BLACK MASS does an effective job of telling the basic bones of this story. Bulger and Connolly make this "devil's deal" and both profit from it, but eventually it becomes too well-known, and it falls apart. As with any historical drama like this, a lot of things get altered, cut, or combined in order to fit a dramatic two-hour cinematic narrative. This got discussed to some degree during the Q&A, where Lehr pointed out that Connolly's supervisor, played by Kevin Bacon in the film, is an amalgam of many supervisors over that twenty-year timeframe, but since constantly changing the characters would be confusing, a decision was made. There are a number of other places where this takes place, of course, and that's of course what happens with any movie of this type, and some of the changes are going to be more contentious than others.

When experiencing the film, the atmosphere throughout is creepy, dark, and highly disturbing. I don't feel it has that same sort of typical gangster movie "rise and fall" story that you see in GOODFELLAS or CASINO, where the crooks make it big, spend spend spend, get sloppy and squabble among each other, and finally cause their own downfall. You see Bulger buy one pair of "nice" shoes and give the shoemaker a generous wad of cash, and that's about it. They all still dress the same, drive the same boring cars, live in the same rather dumpy places, and in general, do not flaunt their wealth or status with parties, drugs, or girls (there is only one "party" scene, and that is a prelude to a murder). In fact, the only character that really conforms to this classic model is Connolly, who begins to "dress fancy" in tailored suits, wears a nice gold watch, and starts acting cocky and sloppy as he becomes more and more entangled with Bulger and his criminal enterprises.

Speaking of Bulger, he comes off more as some kind of slasher movie villain, rather than your average movie gangster. He is utterly cold, diabolical, and ruthless. While he cares for his mother, his brother Billy, and his son, he is more than capable of killing anyone else without any remorse and with only the slightest provocation. He is in no way a flashy, glorified "anti-hero" in any sense, because he displays almost zero human traits and very little of any qualities which one might want to emulate or aspire towards. There is also little indication of *why* Bulger does what he does - he just does it and keeps doing it. There is no goal or endgame, no troubled origin story driving his actions. He's a shark swimming through schools of fish, devouring and moving on without any qualms.

Bulger's portrayal, as well as the lack of any humor or levity whatsoever, works to make this movie emotionally draining. No one cracks a joke, there are no Joe Pesci moments, and the bleak, grimy backdrop of Boston's rather unflattering neighborhoods during some particularly bleak and grimy-looking periods of this city's history make it all the worse. Seriously, Boston isn't exactly a glamorous city, and this is before any of the work done in the last 20 years to make it look nicer and more visually appealing. Even City Hall and the other government buildings downtown add to this, with their miserably institutional appearances. I've been in City Hall several times over the years - it is an *ugly* building - a perfect backdrop for the ugly deals made within its walls during the film.

After the movie, there were more interesting points brought up during the Q&A. For example, when the Boston Globe story was being researched by Lehr and O'Neill, the focus wasn't on Bulger - it was on the corruption within the FBI, particularly as it tied into how the Bureau handled its Confidential Informants. Bulger just happened to be the biggest and boldest example of that corruption, and Connolly the Bureau's most flagrant bad boy. The film doesn't really touch on this at all, and the investigation of the problem seems almost entirely limited to the Bulger-Connolly situation. I don't know if this was done to help limit the scope of the film to something more tightly-focused, or if the filmmakers didn't want to paint the FBI with such a broad brush. Also, the authors, Lehr in particular (he handled most of the Q&A questions, since they were being asked by Boston University students and faculty and Lehr is a BU professor), were greatly concerned/worried that this story *would* go the "Goodfellas" route, and give it an air of glamour and anti-hero-ness, which they both wanted to avoid. But Lehr said after seeing a cut of the film back in May, he was happy to say the "darkness" of the subject matter was left intact.

Overall, I think this movie does a good job of portraying organized crime in the ugly, violent, horrible light it deserves. This isn't a stereotypical crime movie filled with flashy suits, fancy cars, piles of drugs, and lots of loose women. And, almost without exception, the violence isn't "action", but just sudden moments of brutality that make you glance away, feeling unclean for having witnessed the act. Frankly, I don't think it was a "bad" movie, but I am in no rush at all to see it again, if ever.
Posted by Jack Badelaire at 4:34 PM 1 comments