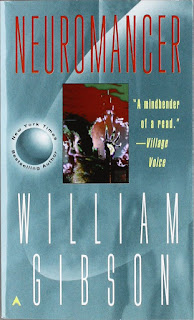 There's nothing I can say about NEUROMANCER that hasn't been said ten thousand times in the 34 years since the book was published. I read it first maybe...fifteen years ago? Some time not too long after college, so in the first couple years of the 21st century. At the time, we didn't have a lot of the advancements we had today, such as smart phones with the sort of power we enjoy now, or a lot of the social media available to us, but we had a good idea where things were leading, and a lot of the technical capability was there, we just weren't taking full advantage of it quite yet.

If you have any interest at all in Science Fiction literature, you know something about the Cyberpunk genre, and if you know Cyberpunk, you've either read NEUROMANCER, or you feel somewhat guilty not having read it yet. It was the defining work in the genre, with pretty much every written or visual work coming after it in the genre taking elements from it, and some elements even bled into more traditional science fiction. For example, in THE EXPANSE series, full-sized computers are referred to as "decks", which is the term Gibson uses for the computer systems used to interact with Cyberspace. Point of note: while Gibson didn't invent the term "Cyberpunk", he did invent "Cyberspace", a term that has become almost universally used by people who don't quite know what they're talking about to discuss That Which Is Accessible On The Internet.

Gibson's imagining of Cyberspace, while tremendously evocative, has never caught on, despite decades of computing advances. The idea that you would access the Internet through some kind of neural interface, and "fly" through a vast cyber-space landscape in order to reach and access data is the sort of thing that Hollywood salivates over (see also: Jurassic Park's "Unix System" scenes), but even in the here and now of 2018, it's just easier to tap an icon on our phones, or click on a bookmark. In fact, when it comes to traditional desktop and laptop computing, the way we use computers is, I would argue, not much different than the way we used them in 1983, when Gibson wrote the novel. Computers at the time had all the basic components of the modern desktops of today, some even using very basic Graphical User Interfaces and mice. Indeed, I would imagine that if you took a computer user from 1983 forward in time 35 years to today and set them down in front of your average modern desktop, it'd take them only a short while to understand that you clicked on icons to launch programs rather than type commands, and from there, you used the mouse to select functions and the keyboard to enter data. The difference lies more in what we use the computers for, rather than how we use them.

Of course, I do not in any way fault Gibson for not predicting the future, especially since the world in which NEUROMANCER takes place is probably well over a century from now, some place likely in the mid-2200s. There are references to a dynastic family existing for over two centuries, so depending on when they started, the book could even be set in early 2300s. By that point, it may very well be that the easiest way to access data is through direct neural interfaces. Of course, there are some odd anachronisms in the novel, such as using traditional telephones! Indeed, like may other science fiction writers Gibson didn't anticipate the pervasiveness of wireless connectivity, except on the largest scale, such as satellite transmissions. Decks are carried around and jacked into wall interfaces, often requiring special jack adapters in order to make them compatible. Data is also quite often carried around and transferred physically, either in the form of tiny sliver-like "microsofts" or larger data cartridges. I always enjoy reading older science fiction works (and truly, NEUROMANCER isn't even that old) to see what older technological paradigms they imagine will still exist in the future.

But of course, that's not what people really read this novel for - they read it for the atmosphere. In fact, it's probably got one of the greatest opening lines in the history of science fiction:

"The sky above the port was the color of television, tuned to a dead channel."


If you can picture that image in your mind's eye, you're most of the way to understanding the aesthetic of the dystopian Cyberpunk setting. The glaring, clashing intermingling of the old world and the new, the gleaming cities of chrome and glass built on the crumbling brick and iron of the old. There's a layer of grime on everything, even new tech, and everyone's got an angle. Anything you eat or drink is recycled from something else, and non-artificial environments are difficult (and expensive) to come by. Weapons are a mix of highly lethal new tech and battered but reliable old tech, and absolutely everything has a price. It is a largely amoral world, where people are simply trying to cling to a life worth living, because if they let go, even for a second, there is no merciful net to catch them, no social welfare program worth giving them the security they need.

So, is there anything NOT to like about this book? Well, to be fair, there are times when Gibson's (usually successful) attempts to be evocative of the setting wander a bit, especially when detailing Cyberspace itself. These moments aren't so much poorly written as they are a bit too lingering, causing breaks in the action, especially at the end of the novel. I suppose this is inevitable in describing something that most people in 1983 couldn't really imagine, so I have no problem with this. The other big pain in my butt with this book is one of my pet peeves in fiction and visual medium - that moment when, in the middle of a climactic moment, the protagonist finds themselves in some kind of idyllic dreamland, where they suddenly are offered paradise, if they just didn't wake up / accept their fate / whatever. I hate this device pretty much every time I encounter it, and there is a moment at the end of this book where that occurs, and it seems to go on forever.

Other than that, and a couple of other quibbles here and there, I enjoyed the novel immensely, and although I don't read a lot of the Cyberpunk genre, it did whet my appetite to go out and find more titles in the genre - specifically, I want to re-read Neal Stephenson's SNOW CRASH, which is a *great* novel.
Posted by Jack Badelaire at 11:06 AM