Although this blog isn't about role-playing games, it is one of my interests and there is, I feel, a strong tie between the sort of casual escapism that most PMP-style fiction gives the reader and the act of playing a fun adventure-style pen-and-paper RPG. Because of this, I think the two interests are more linked than many people might realize.

So without further ado, I present the "teaser" for an RPG project I'm currently developing: 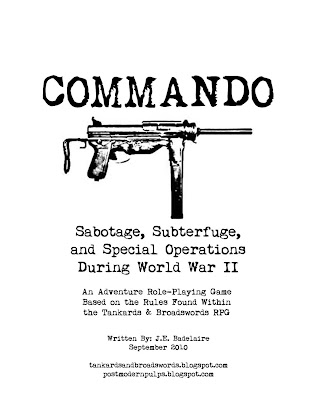 Posted by Jack Badelaire at 11:35 AM 3 comments

Email ThisBlogThis!Share to TwitterShare to FacebookShare to Pinterest
Labels: commando

Ok, so I have my doubts that we're all going to get overrun by the walking dead some day. But having a phone that can last a couple of weeks on a charge, that's light and simple to use and can be unlocked to work on multiple carriers, is a great idea to put in your "bug-out kit".

Here's the CNN Article on the Zombie Apocalypse Phone.

I'd actually seriously consider getting a phone like this, with a well paid-up prepaid SIM card and one of those emergency battery-powered phone chargers. I've got a small "bug-out kit" that I keep at home, something mostly for natural disaster type emergencies where I know all the important stuff will be in case I need to get a flashlight / first aid gear / emergency knife / etc. in a hurry.

Any other readers out there keep something like this handy, and if so, what do you typically keep in it? What would your "fantasy bug-out kit" look like?
Posted by Jack Badelaire at 9:27 AM 1 comments

My Favorite Gun Range is Closed

The Boston Gun Range, which didn't live in Boston but rather Worcester, has been closed apparently for some time now. I hadn't been there in probably three years, but I've gone there a number of times while living in the Boston area and I always had fond memories of the place. The employees were always friendly, professional, and promoted a safe and comfortable environment. If you wanted to talk shop, they would talk shop. If you wanted to go there, do your business, and leave, you could do that as well.

I fired my first Glock 19, my first CZ-75, and most importantly for me, my first Browning Hi-Power at the Boston Gun Range. I fired semi-auto versions of both the M-4 and the AK-47. I was shooting at the range with a friend when his rented .44 magnum blew it's cylinder in half, ripping away the top strap and knocking it through the ceiling tiles. I got to see some older family members shoot for the first time in years, and discovered that some people never lose whatever it is inside you that puts 'em all in the 10-ring even decades after the last time you picked up a handgun. I even got to "compete" (and by that I mean, watch while also doing our own shooting) against some law enforcement types a few lanes down, and we shook our heads looking at their groupings, easily twice the size of most of ours (hint: "tactical" pants don't make you a better shot).

Here is an article from 2007 about this happening.

Here's a blog article commenting on this decision.

Another blog article about this event.

What bothers me about this situation is that the gun range's policies were apparently perfectly acceptable for a number of years until there was an incident, at which point, like the policeman in Casablanca, authorities are "shocked, shocked!" to discover that regular, law-abiding citizens can rent a firearm there for use on the premises. Really? I was there shooting while the local Sheriff's department was doing their training, so I'm sure a fair number of law enforcement personnel had come and gone through the premises while it was in operation, and they must have been aware of the rental policies and procedures. Never mind the fact that the range must have documented these procedures with local law enforcement when it first opened. And, let's not forget that they published their policies for rental on the internet, for the whole world to see. To let the the gun range operate in peace that way for years until it's "suddenly illegal" just bothers me, as the place apparently had a good relationship with law enforcement, who should have stood up and defended the business.

As a writer and gun enthusiast I enjoyed being able to go to a range and seeing, handling, and firing a number of firearms in order to build familiarity and understanding. I grew up in rural areas and I have been shooting since I was probably six or seven years old, when my dad cut down the stock of an old bolt-action .22 rifle so it would fit me better. Moving to Massachusetts, I lost touch with my "shooting roots" here until I discovered the gun range, and now it's gone. Thankfully, there is a range in Manchester NH that I hope to visit soon, since it's not that much further away.
Posted by Jack Badelaire at 9:18 AM 4 comments

Email ThisBlogThis!Share to TwitterShare to FacebookShare to Pinterest
Labels: guns

I read Steve Fainaru's book Big Boy Rules in a day and a half. It's relatively short, easy and quick to read, with a casual but evocative manner that quickly draws you into the narrative and keeps you there through the whole book.

Big Boy Rules is about mercenary companies in Iraq, the "Private Security Contractors" that perform all the convoy escort and protection details that the military doesn't want to or can't spare the manpower to provide. I am not going to dive into the political quagmire of whether or not mercenary forces should or should not be used over in Iraq; the fact of the matter is that mercenary troops have been a part of military life for thousands of years, and I suspect they will always play a role in such conflicts.

What does disturb me is that these mercenary companies have little to no objective oversight into who they are hiring, what their qualifications are (or whether or not they should be disqualified from employment) and how they are behaving once they are in-country. Throughout the course of this book, Fainaru looks at several security companies, focusing mainly on Crescent Security (which seems to be something of a bush-league outfit with questionable hires and management and poor equipment), but also discussing larger organizations such as ArmorGroup (whose review seems mostly positive) to Blackwater (who appear to be running rampant across all of Iraq).

I picked this book up to get a little more information on what the modern mercenary scene looked like, especially in Iraq. What it looks like, after reading Big Boy Rules, is that:

From a "Post-Modern Pulp" angle, one could easily envision a series of adventure novels centered around a "crack security unit" operating out of Iraq, providing high-risk protective details and other paramilitary services that the military isn't or won't be able to handle. You could also take it a couple of other directions; perhaps your main character is a "one man security company" who sells his services to the highest bidder, operating on his own but encountering a whole host of characters throughout the theater of Iraq. Another possibility would be a rough-and-tumble merc outfit, a "bad news bears" styled group of highly skilled but irascible misfits who take the dirty, dangerous jobs that other, slicker companies won't touch.

Also, it should be noted that Big Boy Rules, without giving away any "spoilers", covers a pretty grim event in the history of mercenary outfits in Iraq. The events surrounding the activities of Crescent Security in the 2006-2007 time period go to show that many of these companies can suffer severe tragedies while in the line of fire and on the job, and they do fall into a weird gray area - they are supporting the war, working in conjunction with the governments of the US and Iraq to promote the rebuilding efforts, but at the same time, they are not afforded the same support and aid the military gives troops in the field.

All in all, I would recommend this book to anyone who is looking for more information on private security contractors and mercenaries operating in Iraq, especially from the perspective of the "B-Teams". After all, not every company out there is Blackwater in terms of their gear and their reputation (for good and bad).
Posted by Jack Badelaire at 9:00 AM 6 comments