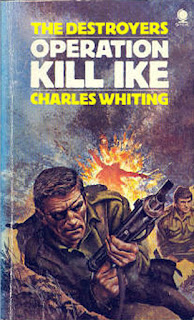 First, apologies for posting a review of the fourth book in a series of six - this just happened to be the first book in the Destroyers series to reach me via the various meandering routes these used books are taking to get to me. I am now reading the first book in the series, OPERATION AFRIKA, and I'll be reviewing it as soon as I finish it.

Charles Whiting is probably one of, if not *the* most prolific writer of WW2 fiction out there, having penned a number of series over the years under several different pen names (such as "Leo Kessler"). This series, the Destroyers, centers on a British army lieutenant, Richard Crooke, VC, who won that medal in the failed attempt to kill Rommel during Operation Flipper. Crooke was a colonel then, but gets busted back to second lieutenant for punching a general in the face when Crooke's request to return to North Africa is denied (all of this is laid out in the beginning of Operation Afrika, by the way).  The series, as best as can be determined, was originally titled "The Dirty Devils", a play off of "The Dirty Dozen" (written a decade before this series was penned) of course, but someone must have realized that wasn't actually a good thing, and renamed them the Destroyers, as the later books post-Afrika refer to them as such, although the "devils" term is still used a couple of times in KILL IKE.

EDIT: After some more digging, it appears that "The Destroyers" is the UK name for this series, and when it was brought over to the US, it was renamed "The Dirty Devils", no doubt to play off of the name recognition of The Dirty Dozen.

Crooke leads a four-man team of scumbags, all of whom have been given prison sentences at one point or another, and they're basically let out of jail to go run amok against the German army on various "dirty" missions, sent on their way by one Mallory, a commander in British Naval Intelligence. The Destroyers are comprised of one Cockney Brit, one half-English, half-Egyptian thief, one Yank, and one defected German. I do like the idea that the unit is multi-national, although it does play into a lot of caricatures (a not-too-terrible problem with such pulpy fare).

In OPERATION KILL IKE, the Destroyers are sent to the front lines in the Ardennes Forest, famous for the Battle of the Bulge. They are to meet a German scientist who has a bottle of "heavy water" that Allied scientists need to analyze in order to determine how close the Germans are to building an atomic bomb. However, when they get to their rendezvous, the scientist is dead, although the bottle is intact, and the German offensive kicks off just as they're trying to make their way back to friendly lines. As they try to fall back, they encounter an American soldier named Weed, a very innocuous-seeming fellow, but it turns out that Weed is actually a German Abwehr agent, who's been sent behind the lines to - of all things - find and assassinate General Eisenhower. The Destroyers then enter into a cat-and-mouse game across France as they try to catch Weed before he completes his mission, which would throw the Allies into such a state of disarray that the Germans (might) have a chance of throwing back the Western front long enough to turn their full attention towards the Russians.

Overall, this was a pretty interesting read. There was a lot less combat than I expected, mostly because of the investigative nature of the mission, but there were a few short fights here and there, and a goodly amount of tension. Whiting as a writer doesn't focus that heavily on the "gun porn" aspects of the action, keeping things breezy and using typical slang like "tommy guns" and "schmeissers", which is again perfectly fine for writing like this. The book is also a very quick read, and easily finishable in either one long evening or over the course of a lazy weekend.

You can find these used paperbacks online (I found all of mine through various used booksellers on Amazon), and although they might be a bit on the pricey side, if this sort of pulp WW2 fare is your cup of tea, you're probably willing to pay for these vintage paperbacks. I still paid less than ten bucks apiece per book - still not cheap, but half of the cost was typically wrapped up in shipping, anyway.

Next up - OPERATION AFRIKA.
Posted by Jack Badelaire at 12:07 PM 1 comments