Two years ago, I wrote a piece called "In 2013, Always be Closing". The year after that, I laid down a 2014 Short Story Challenge. This year, I want to take a look at the past twelve months, where it has brought me, and where I'm going from here.

In 2014, I sold a little over 7,600 copies of my various works, roughly half of everything I've ever sold in the past 3 1/2 years, and 800 more than in 2013. That figure averages out to a little under 21 sales a day over the course of the year. Granted, in the third quarter of the year my daily averages dropped to significantly less than that, but I had a strong opening to the year with the release of Operation Cannibal around Thanksgiving of 2013, as well as a couple of really strong Kindle Countdown Sales during the first quarter. In addition, I'm finishing off the year with a very strong past six weeks, thanks to the release of Operation Dervish, which has sold over 460 copies so far.

I lay out all of the above so that people can decide for themselves how successful I am, and do some comparative analysis with their own and others' sales figures. I was glad to see overall sales increase substantially, and royalties increase as well (I made about a thousand dollars more this year than last year), but it certainly wasn't a bowl-me-over sales year. Let's break it down...

The COMMANDO series made up about 81 percent of my total sales this year, utterly dominating all my other titles. With four novels and a short story, that's certainly understandable, but it is important to point out how much my sales figures depend on this series. Without it, I wouldn't be breaking a hundred sales a month on average. In addition, while I used to sell at least twice as many copies in the UK as in the US every month, the ratio is now mostly even, and with my new title in the series so far, I'm selling far more US copies. There are probably a variety of factors at play here, from the much larger Amazon customer base in the US, to what might be a more saturated genre market in the UK (there are several UK-based WW2 series that aren't available as ebooks in the US), the dominance of the UK sales region is now firmly over.

RENEGADE'S REVENGE was a surprise hit for me this year. I sold a little over 700 copies of this title in eight months, accounting for roughly nine percent of my total sales this year. Since a significant number of these were Kindle Unlimited borrows, I actually made pretty good money off of this title, especially given that it was originally written as a project that failed to launch. For many years, publishers and critics considered the Western genre one of the worst-selling, but there seems to be a resurgence in the last few years, both in re-releasing old titles as ebooks, as well as original content. I fully intend to write a sequel to RR at some point in the next year, and maybe a few other standalone Westerns as time goes on - it is certainly a fun genre to write in, with a great blend of action, adventure, and history.

SPIDERS & FLIES was released at the beginning of the year, and has gone nowhere since. It sold 28 copies in 12 months, 18 of those in the first month of its release. The few reviews it received were positive, and people seemed to like the cover art, but the title simply doesn't sell, even when I have tried free giveaways. Considering its poor performance, and that of NANOK, while I'm glad I finally got around to finishing and publishing this piece, I think even if I can write decent fantasy stories, it isn't worth my time or energy. I doubt I'd even write a sequel to this title, but while I do have several NANOK stories in mind, that's where they're going to stay for the foreseeable future, until I have enough "legroom" to take a chance on writing them.

HANGMAN #1: SAN FRANCISCO SLAUGHTER was also well received by both beta readers and those who've written reviews. However, it did not take off like I'd hoped it would. I sold about 130 copies in the six months it's been out, better than S&F but terrible even compared to RR. I have a number of sequels in mind for this series, and perhaps with an additional couple of titles it'll have more appeal, but so far, I'm not that hopeful. Still, I really enjoyed writing the book, especially since it allowed me to ramp up the "mature content" compared to the COMMANDO titles. SFS contains a lot of swearing, a little sex, and some very cruel violence. It is definitely a darker work, and getting out of my morally-cleaner mindspace was definitely interesting.

KILLER INSTINCTS continues to perform terribly. More than a few people still feel my first novel is the best thing I've written, and I certainly believe it is a good, solid story. I did a cover change for the ebook mid-year, and a couple of promotions helped bring in more sales, but of the roughly 350 copies sold in 2014 (~4.5% of my total sales), at least half were during promotions, meaning I made nowhere near the money I could have with those numbers. Next year I would like to get the title into a BookBub promotion, which would be amazing, but I don't have high hopes. In a market choked with thrillers of all stripes, KI goes largely unnoticed. I would still love to write a sequel to this book, but at this point in time, I feel it would fail to thrive just as KI did, a pointless gesture.

In conclusion, I face some tough choices. It is clear that my niche genre titles (WW2 and Westerns) sell much more than my more mainstream genre works (thrillers, crime, fantasy). COMMANDO titles and RENEGADE'S REVENGE make up ninety percent of my sales this year. Clearly, this is where my focus should lie, but on the other hand, I don't want to limit myself in terms of what to write. Writing is not my full-time job, nor will it be for the foreseeable future, meaning I am not as much a slave to the market as I could be were it my only income. And, in addition, I might stumble upon another genre with a title that's more popular than I'd imagined. Certainly, when I wrote both the first COMMANDO title, as well as RR, I never anticipated their degree of success.

In a few days, I hope to follow this column with one discussing my hopes for 2015. Until then, Happy New Year!

BOOK REVIEW: Into the Gates of Hell - StuG Command '41 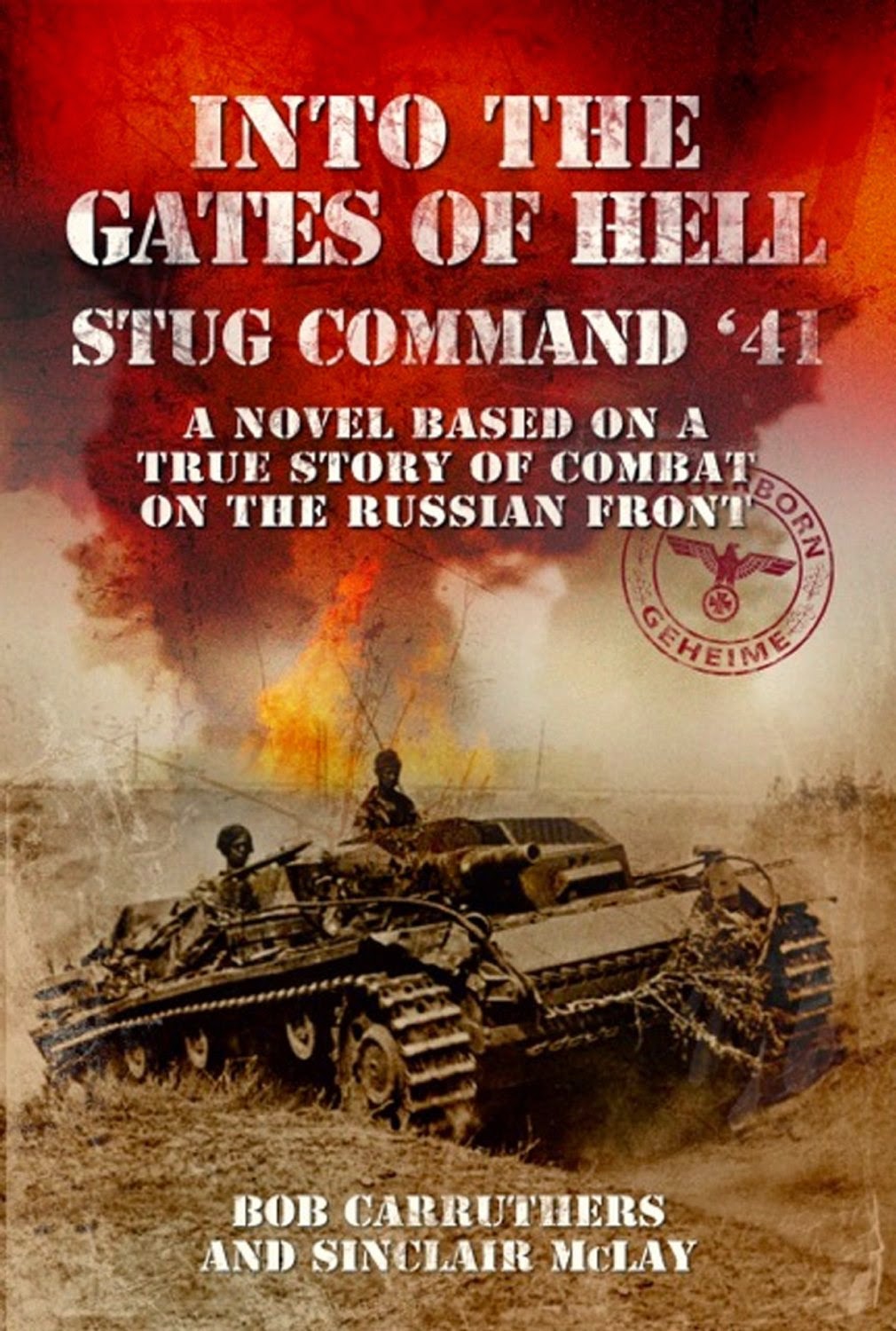 I was curious about a WW2 novel focusing not only on the Germans (of which there are many), but on the StuG assault gun - a fighting vehicle overshadowed by the mighty "Panzer" but just as, if not even more, important. I did notice the title received very mixed reviews, but the price was cheap and I took a chance.

Overall, I have to say this is a flawed book. The story of the siege of Brest-Litovsk is an interesting one, and there's certainly great opportunity for an incredible amount of action and drama. Unfortunately, the book immediately stifles any expectation of said action and drama by choking the reader with an overwhelming amount of exposition over the course of the first third of the book. In fact, the beginning of the invasion doesn't take place until literally 33% of the way through the novel. There are some brief discussions of past combats - especially during discussions of the characteristics of the Russian soldier - but they're not even delivered as flashbacks, just conversations about past events. Along with these are multiple grinding discussions of the various technical details of the StuG III, the Nebelwerfer rocket mortar, the protocols for air support and ground forces signalling to each other, and so forth.

Even once the book takes off and the real plot of the story begins, there are a number of areas where the story bogs down. One particularly irritating example was when a character gets sent back behind the lines for training in Morse signalling, and we are subjected to multiple lectures - yes, lectures - on Morse code and its usage. That Morse signals are tied into a small plot thread at the end of the book makes little difference, and making the reader suffer through so much nonsense, only for it to matter so little, proved doubly frustrating.

With all of the above, I felt justified in knocking a star off the rating. But in addition, the novel doesn't really even focus all that much on the "StuG Command" itself. Although the reader is stuck with the StuG "command" for most of the first third of the book, once the attack begins, the book shifts back and forth multiple times, and by the end, spends most of the action with a German Brandenburger who'd infiltrated the fortress. Since I bought the book largely to read about StuGs battling it out with the Russians at the kickoff to Barbarossa, I thought this book really missed the mark. It really should have been crafted/sold as the Siege of the Russian fortress of Brest-Litovsk, which was a long, bitter, horrible struggle anyway.

Also, I'm not sure what to make of the whole "Ritter Von Krauss" as the real author angle. According to the blurb at the end of the book, this title as well as the book "Tiger Command" and a host of other, unpublished works were originally penned by a German officer whose pen name was Ritter Von Krauss. There's a long "biography" about this German soldier-turned-author, but it smacks of nonsense, and some web searching reveals nothing. Surely there'd be a little more out there about this guy if he'd really written dozens of manuscripts for books after the war, so I feel like this is all made up to lend some hackneyed "authenticity" to the story, just as the book's subtitle calls it a "true" account.

All in all, for three bucks, it's not a bad read. Although the prose can be a little dense at times (and all those SS ranks get a little mind-numbing to read over and over again), it isn't badly written for what it is, and as a book about the opening moves of the German invasion of Russia, it's interesting. I do advise skimming over the first third of the book VERY quickly, though. Almost nothing you learn there plays much significant relevance to the rest of the story.
Posted by Jack Badelaire at 4:59 PM 1 comments