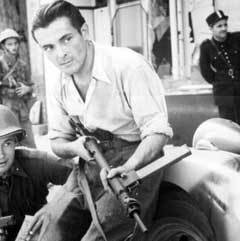 I'm a 30-something blogger, writer, and gamer living in Boston.  I am not, in fact, a well-coiffed Maquisard toting a Sten submachine gun, although that'd be a pretty sweet gig on the weekends.

I've got a degree in Film under my belt, which has come in real handy when I watch and write about movies, but otherwise hasn't done a lot to support my current career in higher education technology management.  I also minored in Classical Studies, which means I tend to annoy people (including myself) by pointing out the similarities between a book/movie/television show's newest plot twist and some Greek play written over two thousand years ago.

Since those awkward grade school years, when all the other kids are reading Where The Red Fern Grows and Charlotte's Web and I was reading Able Team, Phoenix Force, and Vietnam War memoirs, I've had a love of the genre I've come to call "Post Modern Pulp Fiction".  This genre has influenced my amateur writing for over 20 years, and my current novel-in-progress is, in essence, an homage to this largely unsung genre of fiction.  I tend to believe there's a lot more going on behind the scenes of this genre than a lot of people believe, and this blog is an attempt to provide illumination regarding those themes and ideas.

I'm also something of a military history and technology dork.  Growing up in the wilds of Alaska during the Cold War, you had to be able to tell if those were F-15s or Su-27s flying over your town, right?  You also got pretty familiar with guns, knives, snares and traps, gutting your own wild game kills, and a lot of other disturbing childhood anecdotes that explain a lot, some twenty-five years later.  I also have a good collection of single malts in my dry bar, and I currently have poster for both "The Life and Times of Judge Roy Bean" and Peckinpaw's "The Getaway" next to my desk at work.  Along with a rather realistic-looking plastic human skull.

Did I mention I love the environment and I try to recycle whenever possible?

Just putting that out there.

I can be reached through e-mail here: j.e.badelaire [at] gmail [dot] com if anyone wants to contact me directly.  I am typically very good at getting back to people, and if you don't hear from me in 24 hours, feel free to remind me.

You can find me on Facebook at the following address: https://www.facebook.com/jack.badelaire .

As mentioned at the beginning of this bio, I'm also a bit of a gamer, mostly pen-and-paper role-playing games, but the occasional console or computer game, and a board game or two when the mood strikes me.  My gaming blog, Tankards & Broadswords, has been my main blogging venue for several years now, although recently I've taken a break to work on my PMP blog and my writing.

I also maintain an infrequently-updated drinking and dining blog: The Manhattan Project, named after my favorite cocktail.  I hope to keep it more up to date as time goes on.