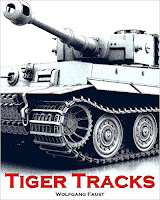 A very common phenomenon in the vague, sweeping genre of "war memoirs" is the false memoir, especially the false World War Two memoir, purported to be written by (most often, I've found) German soldiers and either lost or "published now for the first time" decades after the war. WW2 fiction and/or greatly embellished memoirs of wartime sold rather well among certain demographics, and even today - as I myself can attest - new WW2 fiction is popular among readers. So it is natural that, even now, false or at least dubious memoirs of the war are being "re-published" as ebooks. The "StuG Command" book I reviewed about a year ago was a perfect example of this, a story I am entirely certain is a complete fabrication (and not really that great a book, either).

I found TIGER TRACKS and THE LAST PANTHER a couple of months ago, and bought both for my Kindle. I recently read the two of them back to back - they're both fairly short reads, probably around 25-30,000 words apiece - and I have to say, they were pretty enjoyable. I don't believe for a second that Wolfgang Faust is a real person, or that the name is even a pseudonym of a real person, but I have to admit that the story reads well, albeit rather over-the-top in terms of the lurid violence and misery. The two stories cover different periods of time during Faust's career; TIGER TRACKS takes place in 1943, while THE LAST PANTHER takes place in April of 1945, right at the very end of the war.

Of the two, TIGER TRACKS (available here on Amazon) is probably the weaker story. Faust's unit of twenty Tiger heavy tanks is assigned to take some hill from the Soviets. The fight is bloody and several Tigers are immediately taken out of the fight, but in the end, the Germans defeat the Soviets and take the enemy position. However, the reinforcements that were originally promised never arrive, and they are forced to retreat, after capturing a Soviet female radio operator. The Tiger force is constantly harassed by Soviet attacks, encountering enemy armor, infantry, air attack, artillery, and even a particularly terrifying ambush by a flamethrower team. Whoever Wolfgang Faust really is, the writer is quite good at depicting the absolute horror of mechanized warfare. In particular, Faust is good at showing how the Tiger might be a very tough tank, but it is far from indestructible. Tigers are destroyed by hits from enemy anti-tank guns and other tanks, cracked open by air attacks, set ablaze by flamethrowers or Molotov cocktails - the list goes on and on. He also points out that a tank is not designed to drive everywhere under its own power - it requires tank carriers or rail transports, and must receive constant maintenance. Faust, as the Tiger's driver, is in charge of the mechanical care of the tank, and he is constantly worrying about the bogie wheels, the track links, the transmission and all other aspects of the fighting vehicle, because he knows that no matter how strong their armor, or powerful their gun, all it takes is one broken track link pin to immobilize the panzer and doom them.

On the other hand, the story kind of rambles. After their mission, Faust's tank commander (who is now in charge of what's left of the force) decides they need to bring the Soviet radio operator back for interrogation. So they set off for the rear lines, and the story just becomes a series of harrowing vignettes, until they reach their destination. There's no real drama, other than the need to get back to the rear echelon area, and even when that happens, the ending is a bit flat. I'm willing to forgive that, though, because the action throughout the story is still, in my opinion, rather top notch. As fun as the PANZER PLATOON series is (and I'll write more reviews of it later on), the combat scenes in these two books are far superior. 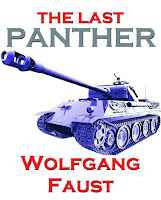 THE LAST PANTHER (available here on Amazon) is the better story of the two, mostly because it has a clear end-goal, and works to ratchet up the tension in getting you there, and the end of the story carries a lot more weight and pathos. In addition, the story revolves around an actual historical event, the "Halbe Kessel" or Battle of Halbe, a week-long retreat by German forces attempting to flee West and surrender to the Americans, rather than be captured (and probably killed or sent to a gulag) by the Soviets. Faust is, by 1945, a Panther panzer commander, and is tank is one of the few remaining in good condition within the group of German soldiers and civilians fleeing the oncoming Soviet army. They know they have to cross the Elbe river, where on the other side the US Army is waiting, but the Soviets are not only to the East, but essentially all around them, slowly closing in and crushing them.

THE LAST PANTHER is definitely more intense than Faust's first story. The inclusion of German civilians, who all know their fate in the hands of the Soviets pretty much involves rape, murder, or (likely) both, definitely makes for much stronger tension over the course of the novel. Women and children die in great numbers as the Soviets attack their column over and over again. The Germans, especially the panzer forces, do what they can to protect the civilians, but they can only do so much, especially as their vehicles keep breaking down, getting stuck, or destroyed by the enemy. Faust is constantly terrified that his Panther's engine will die, because he knows the engine is only good for about 800 kilometers, and at the start of the novel, they're already pushing 900. Fuel is also a big concern, and they're constantly on the lookout for more gasoline, usually taken from broken-down vehicles.

But the story also involves a lot more in-fighting and social tension, between the regular Wehrmacht troops, the Waffen-SS forces, and the civilians. Some of the SS are fanatics, to the point of killing Germans who do not stand and fight, while others are cowards who shed their uniforms and try to hide as civilians because they know the Soviets will give SS men no mercy. The worst-fated of all are the Soviets who are prisoners of the Germans and serve as laborers, because they know their own countrymen will kill them - and probably their families back home - if they're ever captured, but they're the Germans' lowest priority in terms of ensuring those in the Kessel escape the encirclement. Historically, only about 30,000 people - a mere fifth of those attempting the breakout - successfully escaped, so you can imagine the scale of slaughter that takes place in this book. There's on scene in particular, as the column tries to punch through a German village as they're being savaged by a Soviet bombardment, which is particularly awful, but by no means is it the only scene of massed slaughter.

Like TIGER TRACKS, this second book features some really solid, tensely-written combat scenes, and Faust is very good at portraying the various fighting vehicles in something approximating their historical strengths. The Panther was an excellent tank, with a main gun capable of defeating any tank in the world at that time, and very thick, sloped frontal armor that was probably the equivalent, if not superior to, the Tiger's frontal protection. However, the Panther was a smaller, lighter, faster tank, making it more maneuverable and not quite so mechanically fragile (although like all the late-war Panzers, it did break down in great numbers). There are also some good scenes involving King Tigers, Hetzer tank destroyers, and other German vehicles which added to the flavor of the combats.

All in all, these two books are relatively inexpensive ebook reads, fairly short by novel standards but fast-moving and filled with action. They both get relatively good reviews on Amazon (although a fair number of low reviews, mostly complaining about them being "false memoirs"), and they both seem to be selling quite well. If you're a fan of WW2 action-adventure fiction, I highly recommend reading both of them - I don't think you'll be disappointed.
Posted by Jack Badelaire at 11:27 AM 13 comments