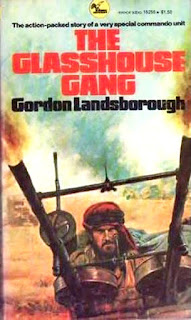 When I first became interested in this series, I assumed it was another Dirty Dozen ripoff - a team of convicts who are recruited by some semi-mysterious Intelligence Officer and offered the chance of a clean slate in order to take on some (no doubt near-suicidal) Commando-esque mission. This was the basic plot of the Destroyers/Dirty Devils series (see previous reviews of books 1 and 4 below), and there is of course no reason multiple series using the same basic plot premise couldn't be written (see also: every ripoff of The Executioner...).

However, Gordon Landsborough's THE GLASSHOUSE GANG is quite different from the expected plot-line. The story instead revolves around a band of British military prisoners, who've been busted for a variety of crimes - some minor, some completely reprehensible - and are serving time in the notorious (but as best as I can tell, completely fictional) Sharafim Prison in Egypt. The prison is run by officers and staff sergeants who are, at best, criminally lax in maintaining humane conditions at the prison, and are, at worst, vicious sadists who take great pleasure in beating and torturing their charges to within an inch of their lives - and occasionally beyond.

The first scene of the book is just such an example of two "staffs" brutally tormenting John Offer, the main character. Offer was formerly a Territorial Army quartermaster's sergeant, whose black-market dealings caused him to go on the run. He joins the Regular Army under an assumed name and becomes a lieutenant, but gets recognized by someone from his TA days, and Offer eventually gets busted because of it, demoted to private and sent to the "Glasshouse", slang for prison. Being a former officer (even a false one), Offer is constantly beaten and tormented by the staff sergeants who work there, and when he is finally released, Offer decides that something needs to be done to settle the score against the non-coms and officers who run the prison system.

One interesting aspect of Offer's background is that he was originally a stage actor, and once released from prison, Offer puts this background into good use. He gets a local tailor to make him a Captain's uniform, "requisitions" a lorry for his own use, and begins to find and recruit men from the Glasshouse he can trust as they are eventually let out after their sentences are over. Using the power of his assumed role and a cadre of men around him to reinforce the legitimacy of his ruse, Offer and his "Glasshouse Gang" spend the first third of the book slowly building up their numbers, acquiring resources, and taking revenge on a few of the "Screws" (prison guards) who were especially vicious to them.

The second third of the book involves Offer and his G.G.C.U. (Glasshouse Gang Commando Unit) executing a prison break, where they free a couple dozen prisoners from Sharafim, and then set up their temporary camp on the edge of the city, where they feast on stolen food and get drunk off of stolen liquor. Eventually these good times end, and the G.G.C.U. flees the law, taking off into the deep desert and eventually arriving at the Siwa Oasis...just as the Germans are attacking and driving the LRDG (the Long Range Desert Group, a unit of deep desert recon men in the British army) out of Siwa. Offer's gang holes up in a grove on the edge of the Oasis for a few weeks, until they discover some of their men (who they thought dead) as well as some LRDG men, in an outdoor prison encampment in Siwa. The last third of the book involves Offer and his men planning and executing the rescue of these prisoners.

All in all, this was actually a very entertaining read. John Offer reminds me a lot of Colonel John "Hannibal" Smith from the A-Team - a leader who thinks unconventionally and fights dirty when he's forced to fight at all. There's not a lot of action in the book in the traditional military sense, but what there is, is written well and maintains a brisk, exciting pace. The rest of the characters are amusing and flesh out the story nicely, especially the conflict between Offer and McTone, one of the more dastardly prisoners who joins the G.G.C.U. during the Sharafim jailbreak.

I can understand why the series only went four books - it's not really the sort of story that lends itself to a long run without becoming repetitive - but I quite enjoyed the first novel, and as I have acquired the other four books, plan on reading them and reviewing the titles here. If you want British WW2 adventure fare that's a little different, do your best to find and read THE GLASSHOUSE GANG.
Posted by Jack Badelaire at 3:17 PM 1 comments 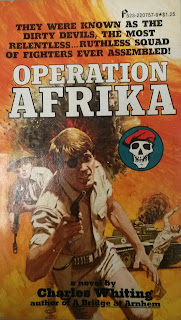 This here is the first book of the series, which I received shortly after reading and reviewing the fourth book in the series, OPERATION KILL IKE. Now, of course, things make a little more sense!

In short, Lieutenant (er, Leftenant?) Crooke, VC, is given the task of tracking down a Brandenburger agent who is loose in Cairo, tasked with freeing a German-sympathizing Egyptian general and getting him into Axis-controlled Libya, where his presence on the side of the Axis forces will cause a schism in the Egyptian army and throw the British war effort into chaos.

Crooke is picked for this mission because he is intimately familiar with the North African desert. Crooke was a LRDG (Long Range Desert Group) Lieutenant-Colonel until the disaster of Operation Flipper, where his LRDG men, tasked with guiding in the Commandos sent to kill Rommel, are caught and killed. Crooke was the only man in his unit to make it back to friendly lines, wounded in the left eye and nearly dead. Crooke punched out a superior officer when he was denied assignment back to the front, and busted back down to Second Lieutenant, where he languished until Mallory, a Naval Intelligence officer, picks him for this mission. Mallory believes that the Brandenburger agent is going to smuggle the Egyptian general out through the deep desert, and so Crooke is the natural choice for the mission.

This is where, of course, things get a little silly. The author makes it clear that Crooke and the "glasshouse men" (read: soldiers in a military prison) he picks for the mission are the only manpower available to Mallory because all the other active-duty men are needed at the front. Of course, this is a mission of vital importance to the war effort as well. So really, while the need for a squad or two of highly trained and motivated men to assist Crooke on a mission which could alter the course of the war is clear, Crooke is forced to find, essentially, the worst of the worst. The men he picks are proficient, to be sure, but they're rogues and criminals, thieves and cowards. In no form of reality would such an important mission be assigned to this goon squad - rather, they'd just pull a squad from the front, since ten men here or there would make little difference in the overall health of the front.

Regardless, this series was clearly written with the idea of piggy-backing on the success of The Dirty Dozen. The series was named "The Destroyers" in the UK, where it originated, but when published in the US, it was renamed "The Dirty Devils", and all references to the Destroyers in the text itself were altered for the American edition. And, of course, having a half-dozen scoundrels running amok in the deep desert is more interesting than a squad of bland, chipper fellows who're just doing their part for king and country.

Overall, this was definitely an interesting read. The plot is a bit over-complicated, as the Brandenburger turns out to be a former German desert explorer now past his prime, who has a personal connection to the Egyptian general, and there's some oddball plot hooks that could probably have been left to the side in order to move the story along. However, there's a good deal of action throughout the book, and the desert adventure scenes - including a very memorable sandstorm - are very engaging.

If you get a chance to pick up OPERATION AFRIKA for a few bucks from a used bookseller, and you enjoy pulpy British WW2 adventure fiction, this is a good series for you, especially since there's six books in the series, so it has some legs to it. The books may be a little hard to find, but with some digging, you should be able to land a copy.
Posted by Jack Badelaire at 2:05 PM 1 comments