This is a brief post to inform anyone who is confused, that the sixth book in the Commando series is now titled OPERATION EISEN. The former title, which was fine to use when I started writing the book, became the name of a police action against a sex crime ring. Since the last thing I want when people google things related to my book is to stumble across articles related to sex crimes, I made the immediate decision to re-title my book. Thus, Book 6 now has a new title.
Posted by Jack Badelaire at 1:34 PM 9 comments 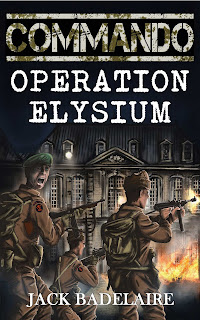 Although it has been a long time since the last COMMANDO novel, Operation Archery, I've finally released the sixth volume of the series, Operation Elysium. The book is currently live in eBook format on the Amazon store (link in the sidebar). The book's description is as follows:

March, 1942. Lance-Sergeant Thomas Lynch and his fellow Commando raiders once again infiltrate Occupied France. Their mission: to carry out a surprise assault on the Chateau de Lorieux, a French estate where heroes of the Waffen-SS enjoy rest and relaxation away from the horrors of war. Unbeknownst to the Germans, Lynch and his comrades bring their own brand of horror, striking in the night with bullets and blades.

But when three of Germany's deadliest and most diabolical SS veterans escape the slaughter, Lynch and the other Commandos find themselves in a race against time. Can they retreat to the French coast and evade the German search parties until salvation arrives, or must they turn their backs to the cold waters of the Atlantic, and fight to the last against impossible odds?

COMMANDO: Operation Elysium is the sixth in a series of military action - adventure novels written in the spirit of classic war movies and wartime adventure pulp fiction.