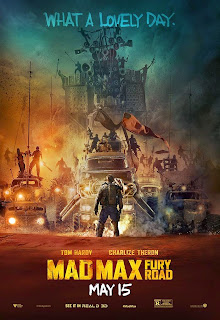 It has been many years - too long, really - since I've seen any of the original three Mad Max movies in their entirety. I know I've seen THE ROAD WARRIOR a couple of times, but it's probably been over 20 years since I've seen the first or third movies. Still I know I enjoyed them all, and I'm a big fan of post-apocalyptic movies like these, relying on desolation and desperation rather than a zombie outbreak as their main settings.

So when they announced FURY ROAD, and I saw the first pictures and the trailers, I knew I was going to be first in line for this new movie. Thankfully, through a connection with a couple of friends and podcasters over at Nerd Spastics, I was able to score early premiere tickets due to Boston Comic-Con's movie promotions. I saw this film last week, and I have to say, I was utterly floored by how much of an incredible spectacle it was.

The plot of the movie is pretty dead-simple. Mad Max is captured by the "War Boys" of Immortan Joe, a warlord living in a massive fortress carved into the side of a mesa. He controls water and food and commands an army of young, fearless men, who follow him without question because he's indoctrinated them all with a Viking-esque belief in Valhalla, where he will make sure they will go if they die gloriously in his service.

Given his relative good health and lack of mutation or disease, Max is set up as a blood donor for the War Boys, many of whom have diseases or tumors and need regular transfusions to live. When Imperator Furiosa, one of Joe's war-rig drivers, goes rogue and escapes with all of Joe's "brides" (aka, sex slave breeding stock), Joe sends out all of his Boys to hunt her down. Nux, one of the younger drivers, is getting a transfusion from Max, and to ensure he doesn't miss any of the action, brings Max along, chained to the front of his car while still transfusing blood via IV needle.

Thus begins a massive, insane chase across the post-apocalyptic wasteland of Australia, as Furiosa and her war-rig try to escape Immortan Joe's seemingly endless horde of other war-rigs, armored cars, and motorbikes. Along the way they run into several different factions in the wasteland, some of them allies of Joe's, some of them hostile to everyone. It doesn't really matter who they are, because in this hellscape, resources are thin, and everyone is a potential source of something you're willing to kill for - bullets, gasoline, food, whatever.

Overall, the movie is an amazing assault on the senses. The score is brutal and powerful and perfect for this kind of insane road-rage taken to its natural conclusion (one of Joe's war-rigs is a massive war-stereo on wheels, complete with war-dummers and a gimp-like madman guitarist thrashing away on a guitar that doubles as a flamethrower). On the big screen, the wanton destruction of men and machines, all moving at suicidally high speeds, looks just phenomenal. While I am sure aspects of the action sequences were augmented with CG effects, all the major action looks like it is (amazingly) practical, real-life carnage of cars smashed into other cars at high speed, with fire and smoke and flaming pieces of twisted metal spinning through the air. The whole effect, from the sound to the visuals, it utterly mesmerizing.

I have to give special props to the folks who handled the production design. Everything looks totally organic to the world in which they're living, from the rusty, beatup weapons to the improvised machinery, to the cobbled together vehicles and their own armor and weapons (like the bucket loader turned into some kind of anti-vehicle weapon, or the buzzsaw on the mechanical arm). Those of you who are fans of the Warhammer 40,000 universe will see how the Orks' love of high-speed mechanical death fits perfectly into this world (and was, indeed, influenced heavily by the Mad Max universe). It feels to me like that influence has reflected back, when you consider this Ork Battlewagon Model:

Or perhaps, one of the Ork Wartrukks:

This isn't a movie that's deep in any meaningful way, it is simply a story of a contest of wills, two forces pitted against each other in the middle of the desert. The Mad Max world has always, for me, been a mythology - a series of campfire tales, told generations after they'd taken place, perhaps to eventually make their way into history books when the world finally picked itself up and began to put itself back together again, centuries later. If you watch these movies with too literal an eye, they might begin to fall apart, but if you think of them like post-apocalyptic version of the Iliad or Odyssey, they make more sense in my opinion.

In conclusion, if you enjoyed the original movies, and if you're more a fan of post-apocalyptic stories that don't involve zombies or viruses or games of hunger, go and see this film. I highly recommend seeing this in the theater, because it simply won't have the same impact on your TV, or - god forbid - on your computer screen.
Posted by Jack Badelaire at 1:59 PM 6 comments