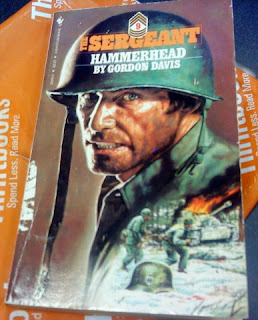 Just a quick Monday morning book review here, folks. I read Hammerhead in about two days, very fast, lots of action, and a fitting wrap-up for the series, although it's a shame that the books don't see us through to the end of the European battlefront.

In this book, Master Sergeant C.J. Mahoney makes it back to his division after taking a detour to Bastogne for a while (of course), to discover that he's got a new Platoon leader, the stiff-necked Second Lieutenant Woodward. Woodward is your classic "all theory, no practice" West Point graduate, the sort of guy who'd get himself fragged in the middle of the night were he in 'Nam around 1969. He's a jerk, he's all about the chickenshit details, and as soon as he runs into Mahoney and his reputation for being a total badass, Woodward decides he needs to break him like some sort of wild stallion, only without the obvious homoerotic overtones that phrase might imply.

While Woodward is no coward, he and Mahoney come into conflict time and time again, and eventually Mahoney does something that earns Woodward's decision to see him court-martialed. Unfortunately for Woodward, about five minutes after that, Mahoney performs a company-saving act of bravery that earns him a Silver Star, making the chickenshit court-martial almost impossible, especially since Woodward is about the only officer in the Division who doesn't think Mahoney is the son of Ares himself. Even so, Woodward tries to get the drop on Mahoney and tace care of business mano-y-mano, with hilarious results.

All the while we've got a sexually depraved nurse, an equally sexually depraved Nazi officer, the sexually depraved Mahoney up to his old skirt-chasing ways (are we noticing a pattern here?), and some good old fashioned people-getting-blown-away World War 2 combat action. And if you thought the use of bayonets in the first Sergeant book I reviewed (No. 6) was nuts, it's even more ridiculous here; practically every firefight boils down to both sides shooting off their loads (no pun intended) in the first few seconds of the engagement, then charging in and battling it out with fixed bayonets and rifle butts, no one ever bothering to hunker down for a moment and reload. Nor do we see the guys with Thompsons or M3s just cutting down Germans with empty rifles and fixed bayonets; such folks aren't to be seen at all. Still, the overuse of bayonet combat does make for some grisly and varied death scenes, for both the bad guys and the good guys.

The interplay between Mahoney, a seasoned and skillful combatant who carries rank but is often challenged and stymied by less experienced, but higher ranking officers, along with the mention of how Mahoney "just happened" to get stuck in Bastogne last book (one I need to find now), makes this series even more of a favorable comparison to the Sharpe novels written by Bernard Cornwell. In fact, the idea that the main character has these running enemies on both sides of the lines who he much constantly deal with and defeat is very much in the spirit of the Sharpe novels, where the main character was always in the shithouse with some peacock of a senior officer who tries to get Sharpe killed or disgraced, only to find himself defeated in the end. In addition, the way Cornwell would "write in" the arrival of Sharpe and some of his men into a historical engagement in order for the author to write about it, seems to be a common theme in the Sergeant novels as well.

I have acquired the first of the Rat Bastards series recently, and I hope to give it a read in the next month or two. It'll be interesting to see how it compares to the Sergeant series, especially since they were supposedly written by the same author under different pen names.
Posted by Jack Badelaire at 9:00 AM

Guess my original post got lost in cyberspace. Anyway, it's cool to read someone else's reactions on Mahoney's misadventures. I, too, wish the series had continued through Aachen and right on to the Elbe. Great review--still chuckling.