My usual disclaimer: It is time once again to put forward my writing summary for the past year. As always, the facts and figures I provide here aren't meant to be boastful - I provide the information so that others can have an understanding of what I've done, what works, what doesn't work, and everything in between. I sell more books than some, and fewer books than others, and that's that.

In 2019 I sold 1,167 eBooks and tracked 471,533 Kindle Unlimited eBook pages read of my material (that converts to almost 1,900 Commando novel-length reads). This is almost a thousand fewer eBook sales than last year, and about 230,000 fewer KU pages. Interestingly, when I look at my royalties for this year as compared to last, I'm only down about $1,100, but of course, there is a two-month sales/royalty overlap (meaning, the money I received in January 2019 was for books sold in November 2018), and indeed the monthly royalties I received in the first quarter of 2019 are much, much higher than what I received at the end of the year. So you can see what my sales trends look like visually, here's January through November, 2019: 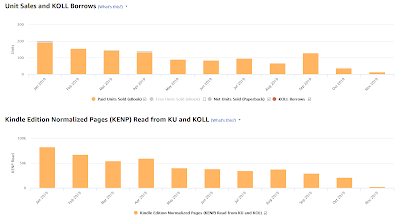 And here is the title-by-title sales for December 2019:

So, why the big downturn at the end of the year?

Well, a couple of reasons. First off, I only put out one title in 2019. That was my WW2 novella The Butcher of Calais, one of the "Commando Short Bursts" titles. While it was well-received by those who read it, it wasn't read by all that many, and I am not sure if that was because it was part of the Short Bursts series, or if it was genuinely not interesting to my Commando readers. Only time will tell, but it is true that this was the only title I released all year. I will say that this past year I did more reading and research for future books than I have in a long time, but frankly, the motivation to write has been pretty weak this year, and I am fighting hard to get past that wall, but so far, I have been unsuccessful. I'll come up with a great idea, do some good plotting work, a bunch of research, get several thousand words on the page...and then it just fizzles out.

The second reason my KDP sales have been so low, especially in the last quarter of 2019, is that I made the decision to partner with an independent press, Wolfpack Publishing, and give them the rights to publish my six Commando novels, as well as Killer Instincts and San Francisco Slaughter. The Commando books were released in two three-book omnibus editions, while KI and SFS were released on their own. Since all my previous "Writing in Review" posts have shown that roughly 90% of my sales and income is driven by the Commando titles, this effectively puts the whole of my financial future as an author in the hands of Wolfpack Publishing. For those of you who have always handed your books off to a publisher, that might just be business as usual for you, but for someone who did it all on their own for eight years, that is a big, BIG step, and I did not take that step lightly. However, as life the last couple of years had meant less time and energy for writing, and definitely less energy for marketing, I decided that giving my books to a publishing house that was well known among my fellow authors for a strong record in marketing and sales, I felt they would be able to do the one thing I could not - find readers for my books.

The ultimate question is, of course, did I make the right decision? Wolfpack's strategy for selling books is to rely extremely heavily on Kindle Unlimited page reads, and almost completely ignore sales revenue. Everything they put out is listed at $0.99, even multi-volume omnibuses like my Commando series. This means that while Amazon paid me $6.18 for every three Commando titles sold, Amazon is now giving out only $.35 for those same three books, and that's before Wolfpack takes their cut. Of course, they target Kindle Unlimited readers and make most of their money from them, and a page is still a page no matter who publishes it, but I made a significant amount of my money from sales, not KU reads, so Wolfpack needs to not only make up what they are taking as their cut of the KU royalties, but all the money I made from sales as well. This means that now, in order for me to make the kind of money I was making on my own, Wolfpack is going to have to sell a lot more copies of my books - especially the Commando series. And I do mean A LOT, like, an order of magnitude more.

Can my new publisher come through on those kinds of numbers? We will have to see. The US sales of the Commando titles aren't very promising. They're still in the six-figure rankings, which is...well it's terrible. In the UK the rankings are much better, but the UK eBook market is different, much smaller, meaning you don't have to sell as much in order to get those better numbers, so while the numbers in the UK are "good", that doesn't necessarily translate to sales being great. On the other hand, Killer Instincts and San Francisco Slaughter are now, after all these years, actually selling fairly well. It was always highly frustrating to me that those two books were well-liked by pretty much everyone who read them, and yet these was so little cross-popularity from Commando readers. So, while I will probably not be rolling around in large piles of KI and SFS cash, those books are finally going to be earning the kind of money I always hoped they'd earn.

I think that's all for this post. Perhaps next week I'll do a post on 2020 projects, but for now, it's fingers crossed.
Posted by Jack Badelaire at 4:02 PM

Beta-readers are indeed extremely important in your process. They will catch mistakes even you or a proofreader didn’t catch, and give amazing tips on how to develop further your story. I used https://honestbookreview.com to get a few reviews and also promote my book. Hopping to be in the top 100 genre lists and see better sales this Christmas season…