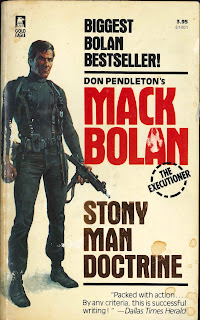 My first cover-to-cover read of 2020 was this classic. I first read STONY MAN DOCTRINE back in either junior high or high school - I can't recall which - as my schools had a lot of donated fiction and someone must have had a collection of Gold Eagle titles. I remember back then thinking how amazingly badass the GE books were, with tons of technical detail and blistering action scenes.
For those of you totally in the dark here, SMD is the first book in Gold Eagle Books' Three-Series "Stony Man" world (I guess Sons of Barabas is also in this world but I don't really count it here) which encompasses the Mack Bolan Executioner series, the Able Team series, and the Phoenix Force series. Essentially the three men of Able Team and five men of Phoenix Force work for Bolan, and in this book they're all brought together for the first time to take on a multi-national terrorist organization called Hydra (no, not THAT Hydra), which is planning to carry out a series of WMD-style chemical weapon attacks against major US population centers unless the US government withdraws all military forces from foreign countries. The President decides that he cannot abandon America's allies, so he calls in Bolan and Co. to hunt down the terrorists and wipe them out.

Reading this again thirty years later, it is still entertaining action fare. The usual Gold Eagle titles are far slimmer than this book, but the author is able to stitch together what're basically two and a half novels' worth of action in order to deliver the first "Super-Bolan" book. Instead of action-interlude-travel-action-interlude-travel as you have in, say, an Able Team novel, this book can just go from team to team to team and keep the action coming.
One thing I did forget about this book was how early on in the lives of the Able Team and Phoenix Force series this took place. I believe it's right around the same time as Able Team #6, and Phoenix Force #5. It was definitely a cool idea someone had to bring all three series together for a big operation, but it is also evident of why it wouldn't work as a formula for every book - the end battle alone, where all nine combatants are fighting, just doesn't give enough "screen time" to each of the characters, and winds up jumping around a lot in order to show us what everyone's doing.
Overall, pretty darn entertaining, and I'm glad to have been able to re-read it after such a long period of time and not be crushed that it wasn't as awesome as I'd remembered.
Posted by Jack Badelaire at 9:00 AM

what does it take to be a successful author ? I would say that initial reviews and marketing definitely boost your book. I used https://usabookreviewers.com/christmas-gift to get a few reviews and also promote my book. Hopping to be in the top 100 genre lists and see better sales this Christmas season…